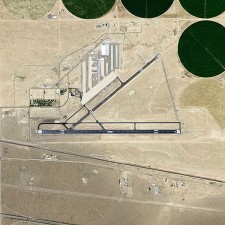 “Early in 1941, prior to American involvement in the war, $389,000 was allocated to enlarge the Daggett airport. The increase in size of the airport was to support bombing and antiaircraft operations by the USAAC… Funding came from the Works Progress Administration (WPA), a program of President Roosevelt’s New Deal…

WPA funding was provided to San Bernardino County in an attempt to encourage local sponsorship of the project. The Army claimed that they wished to see Daggett, and other airports like it, become commercial assets to spend $200,000 to assist in the development of the airport. It is unclear if this funding was in addition to the WPA monies or replaced it.”