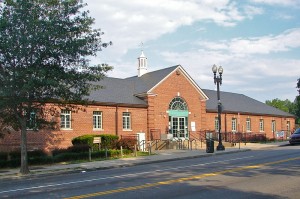 Notably, the CWA was responsible for the completion of the historic Banneker Swimming Pool and Bath House in 1933-34.  Those facilities are still in place.

Most of this was probably done by the WPA, which had undertaken a million-dollar program of park renovation around the city in 1935-36.  But the CCC may have done some of the landscaping, as well.

In short, the New Deal developed a complete recreation complex at Banneker Park where there was none before.

How much of the New Deal original play fields and courts remain is uncertain.

Project originally submitted by Brent McKee - wpatoday.org on May 25, 2013.
Additional contributions by Richard A Walker.