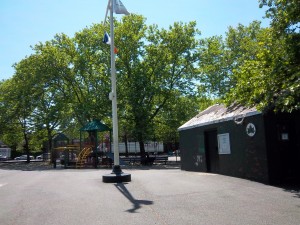 “Banneker Playground is named in honor of Benjamin Banneker (1731-1806), a noted African-American writer and mathematician…

This playground is located on Marcy Avenue between Kosciusko Street and Lafayette Avenue. The site was formerly owned by the Board of Transportation, which held it as part of its property for the G subway line. After 1937, the city maintained a park on the site under a permit from the Board of Transportation. The park was originally built by the WPA (Works Progress Administration), a federal program that built 850 airports, 120,000 bridges, and 125,000 public buildings, in addition to its 8,000 parks nationwide.”

The playground is still in use today.