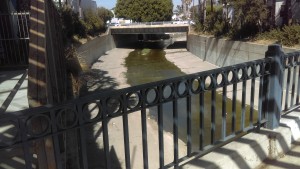 The federal government in the form of the US Army Corps of Engineers played an instrumental role in developing the Ballona Creek waterway in Los Angeles, which helps drain the Los Angeles basin from the Santa Monica Mountains to the Pacific Ocean.

Except for the Culver Blvd and Lincoln Blvd bridges that have concrete guard rails, all have similar steel stringer designs with ornate metal guard rails.