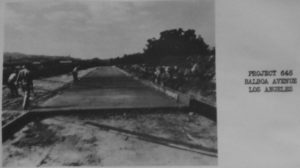 A 1939 report on the WPA’s progress in Southern California described the agency’s extensive involvement in a major roads project improving Balboa Avenue:

“The Balboa Avenue Improvement, Work Project No. 645, was sponsored by the City of Los Angeles to provide a high speed traffic artery between San Fernando Road and Ventura Boulevard through San Fernando Valley. When completed, this street which is primarily a farm-to-market road, will serve, indirectly, a potentially enormous agricultural area by connecting these two major State Highways.

The project was suspended before completion because sufficient workers for efficient operation were unavailable in this agricultural district. However, the 4.5 miles of completed road comprises a useful unit of this artery.

Additionally, 617 men on average per month were employed for 6 months. It was changed afterwards from Avenue to Boulevard. According to a 1980’s topographic map, the boulevard still didn’t connect Ventura Boulevard with the San Fernando Road on the north end and was probably finished with the construction of Highway 118. 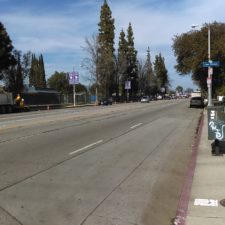