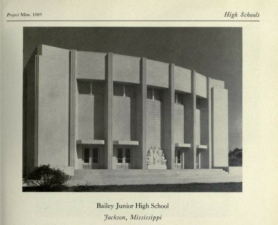 Then Bailey Junior High School. C.W. Short and R. Stanley-Brown. "Public Buildings: A Survey of Architecture of Projects Constructed by Federal and Other Governmental Bodies Between the Years 1933 and 1939 with the Assistance of the Public Works Administration." (1939).

Originally Bailey Junior High School, this historic building is “two stories and a basement in height and, due to sloping site, part of the basement is entirely above grade.

The basement contains locker and shower rooms, a cafeteria, kitchen, club rooms, assembly room, industrial-arts rooms, shops, workrooms, and laboratories. On the first floor are the gymnasium, band room; domestic-science department including an apartment, a sewing room, and a cooking room; also 12 classrooms, rooms for the fine arts and natural sciences, the auditorium with its stage, a clinic, and administrative offices. The second floor contains the bleachers for the gymnasium, 10 classrooms, a science laboratory; and rooms for fine arts, natural science, and music.

Construction is reinforced concrete throughout with structural-steel trusses over the auditorium and gymnasium. Roofs are composition. The project was completed in November 1937 at an estimated construction cost of $317,040 and a project cost of $388,641.”
(Short and Brown)

“Built in 1938, Baily Magnet’s art-deco building has been marveled as an architectural wonder. It was recently voted as a top architectural site by the state chapter of the American Institute of Architects. According to the Washington Post, its Architect, A. Hays Town, while employed at J.W. Overstreet designed the building & it was featured in Life magazine in 1938, “for the school’s forward look and his revolutionary technique of formed-in-place concrete”, with the marvel lying “in the details” which include “carved stone reliefs of Andrew Jackson (the…namesake [of the city of Jackson]) with his troops and Chief Pushmataha with his braves, allies in the Indian wars,” at the front footsteps of the building. The halls are terrazzoed and the great auditorium has “ornate columns and a stylized horse-and-rider sculpture.”
(Wikipedia)