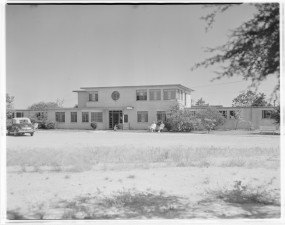 On October 6, 1938, the Austin City Council adopted a resolution accepting financing from the Public Works Administration for a tuberculosis sanatorium including necessary equipment. The grant would pay for 45% of the cost of the project, not to exceed $24,750. The city located the project on sixteen acres of land in far East Austin. On December 1, 1938, the city council accepted a bid of $44,600 from contractor Will O’Connell of San Angelo for construction on the sanatorium building. On February 2, 1940, the city council declared the contracts with O’Connell and most of the subcontractors for the sanatorium to be be complete and satisfactory.

The site now serves as The Salvation Army Austin Shelter for Women and Children.