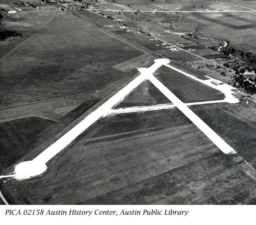 The runways of Robert Mueller Municipal Airport were Works Progress Administration (WPA) projects conducted in the late 1930s-1940s. The municipal airport was replaced by the Austin-Bergstrom Air Force Base in 1999, and became the Austin-Bergstrom International Airport. Now, Robert Mueller Airport is being redeveloped for mixed-use purposes, including housing and stores.

The airport officially opened in 1930 with one small building, gravel runways, and a gas pump. There were only a few flights during this time because of how small it was. This WPA project was one of many to expand the airport and it focused on creating two new runways. It was a turning point for the Austin airport because after it, many additions followed and flights became accessible to the average American. It was a potential starting force for commercial air travel in Austin. Austin was granted $36,947 for these two new runways as well as topping the hangar floor, and taxiway with asphalt. This particular project finished some time in 1939.

These national WPA projects to improve airports put more than 40 million Americans to work during the New Deal Era. Other cities, in Texas, included in this plan to expand airports were Corpus Christi, Waco, College Station, Houston, and San Antonio.

Shortly after this project, a new terminal was built at the airport in 1942. During World War II, the municipal airport served as one of 4 auxiliary airfields used in Austin. The WPA and local government placed these runways in Austin most likely because they knew it was a prime location and could be used as future military airfields, coming out of WW1. This WPA project, along with the national New Deal project, facilitated major growth in commercial air travel for Austin and many other cities throughout America.