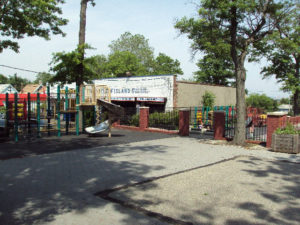 “In 1918, the War Memorial Fund was established to create a $1 million Memorial Arch to commemorate those killed in World War I. The organizers were forced to adjust their plans when they were only able to raise $210,000. By 1922 the project was scrapped and the money turned over to the City. Through time, the unspent fund earned interest, growing to nearly $340,000 by 1934. Commissioner Robert Moses (1888–1981), seeking additional open spaces for children, convinced the remaining members of the War Memorial Committee to allow the funds to be used for playgrounds…

The War Memorial Fund was transferred to Parks on March 19, 1934, and with additional funding from the Federal Temporary Emergency Relief Administration, the nine playgrounds were constructed in less than four months. The completion of these playgrounds was part of Moses’s drive to increase the number of playgrounds citywide – in 1934, his first year as Commissioner, Moses built nearly 40 playgrounds, where there had only been 119 in the City before, a 33% increase in one year alone.

The dedication of the War Memorial Playgrounds was made in an official ceremony led by Mayor Fiorello H. LaGuardia (1882–1947) and Commissioner Moses at William E. Sheridan Playground in Brooklyn. It was simultaneously broadcast to all the other playgrounds by an elaborate public address system. McDonald Playground, as with the other eight playgrounds, originally featured play equipment, a wading pool, a brick field house with a recreation hall, and a heating plant. A flagpole was placed at each site and the tablets were placed on each field house.”