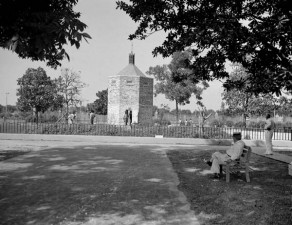 “The Audubon Zoo is a zoo located in New Orleans, Louisiana. It is part of the Audubon Nature Institute which also manages the Aquarium of the Americas. The zoo covers 58 acres (23 ha) and is home to 2,000 animals. It is located in a section of Audubon Park in Uptown New Orleans, on the Mississippi River side of Magazine Street. The zoo and park are named in honor of artist and naturalist John James Audubon who lived in New Orleans starting in 1821…

During the Great Depression a $400,000 expansion of the zoo was conducted by the Works Progress Administration. Many new cages were constructed, along with an artificial hill known as “Monkey Hill”, built to show the children of flat New Orleans what a hill looks like. Local folklore calls Monkey Hill the highest point in New Orleans, although another artificial hill in City Park competes for that title…”   (wikipedia)

Another source explains that Monkey Hill was actually built earlier than the rest of the zoo by the CWA.  (www.nola.com)