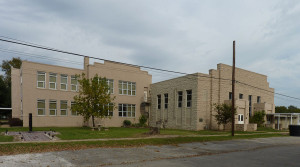 This WPA project was described in the National Register of Historic Places Feature for African American History Month in 2012:

“A combined elementary, junior high and high school, Attucks School was one of seven such schools that served African Americans in Vinita, Craig County, Oklahoma,  and was the only one that had a secondary school until after racial desegregation in the mid-1950s. Established in 1915-1916, Attucks School is also important for its association with the Works Progress Administration (WPA), a New Deal agency created in the 1930s to stimulate local, state and national economies during the Great Depression. In 1939 the WPA built a gymnasium for the school that is located in the southwest-southeast corner of the building…

Stylistically the school is a combination of a simplified Art Deco style and WPA construction. The Attucks School was listed in the National Register of Historic Places on December 3, 2009.”   (https://www.nps.gov/)

The school is also known as Southeast Elementary School or Attucks Alternative Academy.