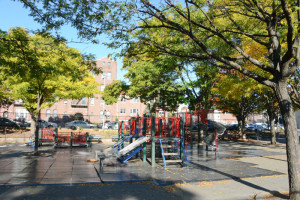 The Astoria Heights Playground, covering most of the block between 30th Rd., 31st Ave., 45th St. and 46th St., was developed by the Parks Department and the WPA in two stages between 1937 and 1938.

In September 1937, a playground for small children was opened, “as well as handball courts for older children and benches for mothers and guardians.” Just over two years later, the Parks Department announced the completion of the rest of the playground:

“[T]he new 2.3 acre area supplements and includes the small recreational area opened in 1937, and rounds out the entire block, the southerly end of which was acquired by the Board of Education for school purposes. Here the recreational facilities will not only provide healthful benefits for the surrounding neighborhood, but also an adequate play area for the school children during school hours.

At this location there is a completely equipped children’s playground with kindergarten apparatus for children of pre-school age, two softball diamonds and a large permanently surfaced area which may be flooded for ice skating when sub-freezing temperature permits. There are also two basketball, two volley ball, six handball and three tennis courts.”

This work was “designed by the Department of Parks and built for the Park Department by the Work Projects Administration.”

The playground is still in active use.