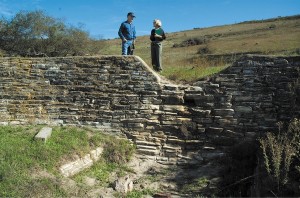 The Civilian Conservation Corps (CCC) and Works Progress Administration (WPA) were called on to aid local farmers in control works for soil erosion.  Their work played an essential role in the origins of the Soil Conservation Service (SCS).

“Farmers in Arroyo Grande, desperate to eke out a living during the Great Depression, were plowing their land to plant bean and pea crops. The unintended result was massive erosion.

‘Arroyo Grande was an eye opener’, Hugh Bennett, the first chief of the Soil Conservation Service, wrote in 1935.  ‘I can think of no other place in the United States where erosion is any worse.’

‘They selected this area because they thought it would make a good demonstration,’ conservation service historian Douglas Helms said. ‘They wanted to prove that you could conserve the land and still have it be productive.’

‘…From 1934 to 1937, the federal government sent crews from the Civilian Conservation Corps and Works Progress Administration to work with the farmers. They installed erosion-control check dams; planted trees and cover crops to stabilize damaged areas; and used terrace planting on slopes to minimize erosion.

…Successful demonstration projects such as the one in Arroyo Grande helped Bennett persuade the federal government to establish the Soil Conservation Service,’ Helms said.”  (Sneed 2010)