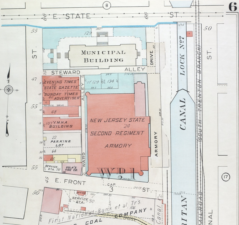 1930 Real Estate Plat-Book of the City of Trenton and Borough of Princeton, Mercer County, New Jersey (Plate 6 of 48, Trenton)

A 1930 map identifies the armory’s location as the northwest corner of what was then the intersection of E. Front St. and Armory Dr.

The fate of the building was detailed in a 1975 New York Times article: “A raging fire sent flames more than 100 feet into the sky destroyed the Trenton Civic Center early today. The building, a converted National Guard Armory, housed city offices and records. City officials were looking for room to accommodate 300 city employees who normally work in the Civic Center.”