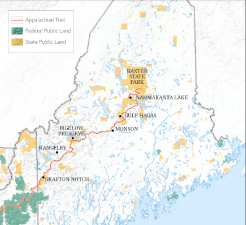 “As early as 1924, published accounts of plans for the Appalachian Trail called for it to extend to the summit of Maine’s Katahdin. Later, although some (notably Myron Avery) urged that the Trail continue to Katahdin, the scarcity of existing trails, the lack of hiking clubs to assume the maintenance of the new trail, and the remoteness of the land along the proposed route combined to discourage an extension beyond New Hampshire’s Mt. Washington. But, in 1933, following a two-year survey of possible routes, a location for the Maine section was developed by using existing trails and logging roads, as well as newly constructed trails.

Volunteers from all walks of life–lawyer Myron Avery, geologists J. Frank Schairer, Shailer Philbrick, and Albert Jackman, Broadway actor Walter Greene, Bates College Professor W.H. Sawyer, game warden Helon Taylor, fire wardens and foresters–marked and cleared the Trail throughout 1933 and 1934. In 1935, the Maine A.T. was made a part of the work of the Civilian Conservation Corps. Through 1936 and 1937, final sections were cut, the existing Trail was widened, and eleven “Adirondack lean-to” log shelters were built in western Maine. On 14 August 1937, the section between Spaulding Mt. and Sugarloaf was finished, marking the completion of the entire Appalachian Trail.

The Maine Appalachian Trail Club was organized on 18 June 1935, to assume supervision and maintenance of the Appalachian Trail in Maine. Trail maintenance suffered from a lack of workers during World War II, but the MATC continued to grow and to improve the route, becoming the major force behind the management of the Trail in Maine. The chain of lean-tos begun by the CCC program was completed by the MATC during the late 1950s. Replacement of the earliest shelters began in the 1960s.”   (www.matc.org)

Location notes: Marker is for Mt. Katahdin, the northernmost point on the Appalachian Trail.