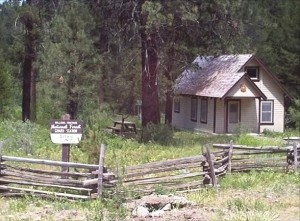 Built in 1935 by the Civilian Conservation Corps, the Antlers Guard Station was originally used to house project and fire crews. Later on, guard stations lost their utility, because the Forest Service had quicker ways to get to forest areas without these stations. Starting in the 1990s, the Antlers Guard Station was rented out to the public, and in 1991 was listed on the National Register of Historic Places.