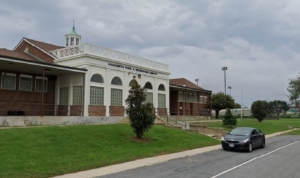 The present day Anacostia Pool & Recreation Center was constructed at the very end of the New Deal, as it overlapped with the country’s entry into World War II.

On May 15, 1942, the Evening Star newspaper reported that “A $69,000 recreation center for servicemen to be erected in Anacostia and operated by the United Service Organization [USO] has been approved by President Roosevelt… the new center will include a large social hall, refreshment stand, reading, writing, and game rooms and other facilities. The hall will be used for dances, movies and sports.”

The Federal Works Agency (FWA) was to plan and supervise the construction, probably with Lanham Act funds (the Lanham Act provided money for improved infrastructure for America’s domestic wartime needs).

Details on the new recreation center building are scarce, but subsequent Evening Star articles indicate that the building was completed in 1943, located between 11th Street and Pennsylvania Avenue, SE, and on the western side of I-295 (a highway that was built later, starting in the 1950s).

The present “Anacostia Pool & Recreation Center” building has architectural features that were popular during the 1930s and 40s, such as a cupola and block glass. It is also a fairly long building that could accommodate a “large social hall.” These features, as well as the location information detailed above, lead us to believe that this is the FWA-constructed building. Further confirmation is needed.

The pool behind the recreation center was a separate New Deal project.