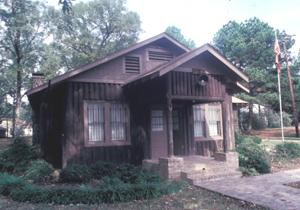 “American Legion Post #127 (also known as the Wilson Burnett American Legion Post #127 was first chartered on April 9, 1920, though this structure was not erected until 1934, when it was constructed by the Works Progress Administration.  The onset of the Great Depression in 1929 and the subsequent advent of such federal public works programs as the Works Progress Administration (WPA) first brought such public buildings as, schools, community halls and American Legion posts to the Eudora area in 1934…Among its various other projects, the WPA constructed or repaired a number of rural school buildings throughout the state, and American Legion Post #127 was erected as part of this statewide effort. The American Legion Post #127 Building in Eudora is eligible under Criterion C as the best example locally of a building designed in the Rustic style of architecture.  Its vertical exposed logs, low spreading gable roofline and almost total reliance upon exposed exterior structure to comprise its detail are all features that are characteristic of this style.”