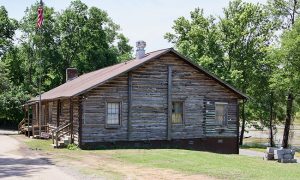 The Jess Norman Post 166 American Legion Hut is a historic clubhouse at 222 South First Street in Augusta, Arkansas. It is a single-story rectangular log structure, with a gable roof and a stone chimney. It is fashioned out of cypress logs joined by square notches, and rests on piers of stone and wood. It was built in 1934 with funding from the Civil Works Administration for the local American Legion chapter, and is architecturally unique in the city. It is still used for its original purpose. (wikipedia)

“The CWA approved $1,779 for the project, of which $1,120 was earmarked for labor. By January 11, 1934, work was underway, as the Advocate reported: “A dozen or more workmen are busy in the woods cutting the 300 logs that Wade Sale has donated for the exterior and another small crew is leveling ground for the building.…The Stanley power boat ‘Cut Off’ will be used to bring the logs down the river to the building site.”

By February, the Legionnaires realized that the CWA funds would be insufficient “since such items as the rock chimney, the chinking of the logs, etc. were not included in the original outlay,” and the group began a membership drive to raise the money needed to complete the structure. They apparently succeeded, as a March 22 Advocate article noted that workers at the hut “have revived the lost art of making roof boards. The town had to be scowered [sic] to find froes and draw knives,” but in two days, the workers succeeded in making 6,000 of the 20,000 shakes needed for the roof. A week later, the city put in a road to the nearly finished hut, a kindness repaid by the Legionnaires by an offer to allow the city to hold its regular monthly council meetings in the building after its completion.

By May 24, 1934, everything was done except construction of the stone fireplace and chimney and the addition of a rail around the balcony, and, on June 21, the Legionnaires announced that a barbecue would be held on July 4 to bring the hut officially into service. Some 150 people attended the opening, and the Advocate reported: “Although the event had been advertised as a barbeque, it turned out to be a banquet. Never before was such a dinner served here. There were three kinds of barbeque: Mutton, goat and pig, dishes and dishes of salad, cakes, pies, and every other good thing to eat.”

The building remains in service in the twenty-first century through the joint ownership of the Jess Norman Post 166 and the City of Augusta. (encyclopediaofarkansas)

The building was listed on the National Register of Historic Places in 2001.