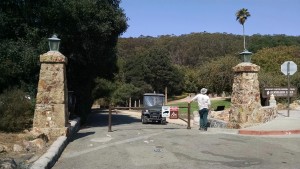 The New Deal made major improvements to Alvarado Park on the east side of Richmond CA, where Wildcat Creek tumbles out of the East Bay hills.  The work included clearing, leveling and landscaping picnic areas and building stone stoves around the park.  WPA workers also built a stone bridge across Wildcat Creek and stone light standards along roads and paths. (see linked pages).
The site was originally private recreation area called “Grand Canyon Park”, opened in 1909.  Extensive stone walls and paths remain from that time, but a popular outdoor pavilion and dance hall (later converted to a roller skating rink) has disappeared.  The City of Richmond bought the park in 1923, after it had fallen into disrepair, and began to renovate the park.
In the 1930s, New Deal agencies were called upon to renovate the park.  The Civil Works Administration (CWA), California State Emergency Relief Agency (SERA) and Works Progress Administration (WPA) all contributed.  We have no information on the specific activities of the CWA and SERA (funded by the Federal Emergency Relief Administration).
Alvarado Park was transferred to the East Bay Regional Park District in 1985 and is now the “Alvarado Area” in Wildcat Canyon Park.
From the City of Richmond website: “Alvarado Park has long been a favorite picnic spot in Richmond. The original facilities at Alvarado Park included an open-air pavilion and dance hall (later converted to a popular roller rink). These are now gone; what remains is the extensive stone work, including stone walls, stone light standards, and a beautiful stone arch bridge across Wildcat Creek. Because of the unique history and depression era WPA stone work, Alvarado Park is included in the National Register of Historic Places. Alvarado was a city park until it was transferred to the East Bay Regional Park district to become part of Wildcat Canyon Regional Park.”
There are two WPA project cards on Alvarado Park in the National Archives.  The first indicates the following work to be done:  “Make general improvements to Alvarado Park and park facilities located on Park Avenue in the City of Richmond, Contra Costa County. The work includes grading and graveling paths and table areas; grubbing out and spraying poison oak; landscaping; constructing barbecue stoves, with grates; constructing tables and benches; installing water pipe; constructing and installing lighting poles, with appurtenant wiring, luminaries, and other electrical equipment; performing other appurtenant and incidental work.”
The second card in 1938 indicates this additional work: “Improve Alvarado and Mira Vista Parks in the City of Richmond, Contra Costa County, by building wall, constructing roadway, installing lighting fixtures, grading and surfacing paths, and performing other incidental and appurtenant work.”

The stonework, done chiefly by Italian immigrant masons, is so remarkable as to gain recognition of the park on the National Register of Historic Places.