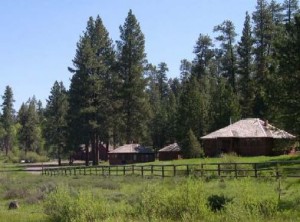 Located in the Snow Mountain Ranger District of the Malheur National Forest (transferred from the Ochoco National Forest in 2003), the Allison Ranger Station can be described as historically  significant given its age and continuous use in the administration of the Forest Service’s responsibility for this relatively remote area in the Ochoco Mountains of eastern Oregon. The timber and summer forage have been important to the local economy’s lumber and stock-raising industries.

The Allison Ranger Station served as the administrative headquarters for the district from 1911 until the 1950s when the headquarters was moved to Hines, Oregon. At that time, the compound was converted to a guard station for fire crews. The station consists of seven rustic building including the original ranger station built in 1911 (Donnelly Cabin) and six of the seven buildings constructed by the Civilian Conservation Corps in 1935. The Donnelly Cabin is listed on the National Register of Historic Places while the CCC buildings remain eligible for listing.

Constructed in the distinctive Depression-era Cascadian Rustic style (Oregon SHPO), the CCC wood-frame buildings include two ranger residences, a fire warehouse, a gas house, a garage and a cookhouse. The seventh original CCC building, the generator house, was demolished in 2005 during a Forest Service renovation project. During the 2005 project, care was taken with the other structures to preserve their historic character.  Members of the public may rent the cookhouse, which includes bedrooms, living space and an indoor bathroom, from late May until early October.

The remote Harney County facility is approximately 60 miles northwest of Burns, located at 5,500 feet elevation in a ponderosa pine forest. The station received its name from Jesse Allison, an area homesteader.