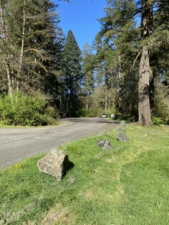 As noted in the Oregon State Park’s 1965 publication: “The facilities at Alderwood are not extensive, being a small area for parking cars, two foot-bridges, trails, tables and sanitary facilities, all constructed by the Civilian Conservation Corps.” Necessary maintenance at the wayside has resulted in replacement of some of the improvements but the basic lay-out remains the same.

Project originally submitted by Judith T Kenny on May 28, 2022.