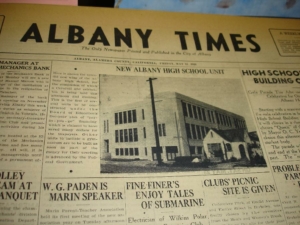 Albany did not have a public high school until 1936; students traveled to Berkeley, Richmond or Oakland.

The WPA and PWA contributed to the building of Albany High between, roughly, 1936-1941. According to the Albany Times from that period, five building units were constructed, including administrative offices, classrooms, laboratories, a cafeteria, nurse's offices, print shop, library, theater, gym, and music room.

The building suffered significant damage in the Loma Prieta earthquake in 1989. It was condemned after remodeling was found to be impractical and was demolished in 1998. The new Albany High School buildings occupy this same site.

A historical description of the WPA-built high school reads:
'This concrete two-block-long late WPA Moderne building is painted institutional yellow. The auditorium, at the southwest corner of Thousand Oaks and Pomona Street, is the most original part of the design, 1941.' – Mark A. Wilson, 'East Bay Heritage,' California Living Books, 1979. 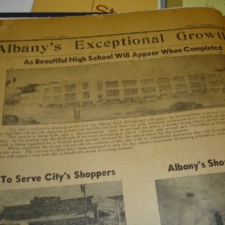 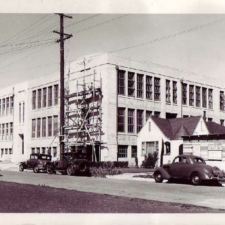