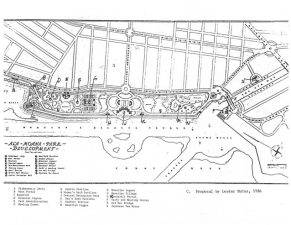 In 1932, the city government began grading work and site preparations on the grounds of the Ala Moana park with the help of territorial relief funds. But it was the advent of federal assistance in 1933 that expanded the scope of construction and park development. Robert Weyeneth describes the process in the volume, Ala Moana: The People’s Park: “The Federal Employment Relief Administration (F.E.R.A.) and, briefly, the short-lived Civil Works Administration (C.W.A.) provided the resources for the park board to undertake a major construction program in the thirties. During the construction program funded by the CWA and FERA, the daily labor force was as high as 800 to 900 workers.” Charles Lester McCoy, “chairman of the Honolulu Park Board for ten years, oversaw “the creation of Ala Moana Park in the thirties, coordinating federal relief, the designs of professaional planners, and the views of fellow board members (…).”

The 1935 Annual Report of the Governor of Hawaii to the Secretary of the Interior makes note of the ongoing work at the Ala Moana park grounds: “Work on Moana Park, Honolulu, the portals of which were dedicated by President Roosevelt during his visit to Hawaii in July 1934, has progressed very satisfactorily, and the park is well on the way toward becoming what many have termed “one of the most beautiful waterfront developments in the world.”

Weyeneth writes that the materials used for the park construction reflected the ongoing scarcity after the Great Depression: “Ala Moana Park was the creation of the hard times of the Depression, and nowhere are these historical origins more evident than in the erection of the park’s walls and terraces. The story of their construction so closely mirrors the growth of the park as a whole that it would not be too much of an exaggeration to say that these modest rock walls symbolize the successful struggle to create the park in the midst of national depression. While territorial and federal emergency assistance provided the labor that made park development possible, from the beginning funds themselves were limited. As a consequence, Bent and McCoy had to devise construction methods that required only minimum outlays for materials and tools and that permitted use of inexperienced and unskilled relief labor. The solution was a technique called boulder concrete construction. The process saved money by using indigenous materials and could be easily learned by people unfamiliar with the building trades.

Harry Sims Bent acknowledged that the shortage of building materials profoundly affected his designs: ‘There was some ignorant criticism at the time on the score of the massive type of construction carried out. The critics did not know or care that this was mandatory because the only type of construction possible under the material limitation was boulder concrete.’

In more suitably formal locations in the park, like the walls at the Roosevelt Portals, the boulder concrete is finished with a layer of stucco painted white to hide its humble origins.”

(as outlined in Robert Weyeneth, Ala Moana: The People’s Park) 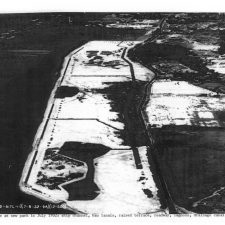 Hawaii State Archives, Honolulu. Weyeneth, Robert, 1987, Ala Moana: The People's Park, Prepared for the Department of Parks and Recreation. 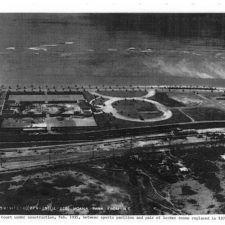 “Banyan Court under construction, Feb. 1935, between Sports Pavilion and pair of locker rooms replaced in 1970s.”

"Banyan Court under construction, Feb. 1935, between Sports Pavilion and pair of locker rooms replaced in 1970s."

Hawaii State Archives, Honolulu. Weyeneth, Robert, 1987, Ala Moana: The People's Park, Prepared for the Department of Parks and Recreation.

"Banyan Court under construction, Feb. 1935, between Sports Pavilion and pair of locker rooms replaced in 1970s." 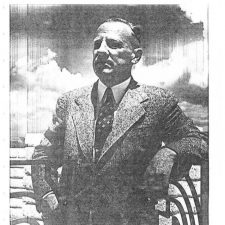 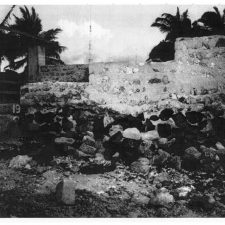 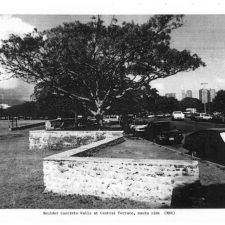 Robert R. Weyeneth. Weyeneth, Robert, 1987, Ala Moana: The People's Park, Prepared for the Department of Parks and Recreation. 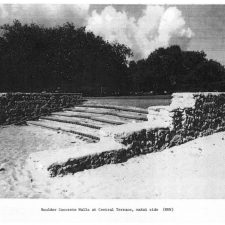 Robert R. Weyeneth. Weyeneth, Robert, 1987, Ala Moana: The People's Park, Prepared for the Department of Parks and Recreation.

View all projects at Ala Moana Park - Honolulu HI (7 Projects)