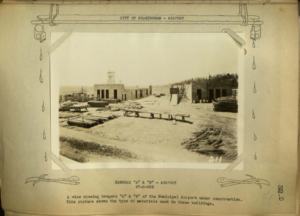 Established in 1931, the airport now known as Birmingham-Shuttlesworth International Airport was the site of substantial work relief efforts on the part of multiple New Deal agencies: the Civil Works Administration (CWA) and Works Progress Administration (WPA).

CWA 37-C-826 “The Municipal Airport project incorporated the combination of the work on the present landing field and the construction of hangers and necessary pertinent auxiliaries for the 106th Aviation Squadron of the Alabama National Guard, both divisions of the Airport having the use of the same landing field but with separate housing facilities, buildings, runways, aprons, etc.
The entire project was divided as follows:
(1) Constructing a roadway from the existing Municipal buildings around the south, west and north side of the field to the site of the group of buildings for the 31st Division Aviation Alabama National Guard.
(2) Constructing a riprap wall on each side of the present ditch which borders the west and north side of the field. This riprapping to come to the culvert which extended the ditch under the aprons and the south side of Hanger “A”. From the cast end of the apron to Hanger “A” the ditch was provided with side walls at a 2 to 1 slope and sodded.
(3) Cutting down of trees covering approximately ten (10) acres south and west of the present Municipal Hanger building.
(4) Filling certain areas south and west of the present Municipal Hanger Building.
(5) Leveling off and properly draining the entire area from the east side of the National Guard property and between the boundary fence of the flying field to the roadway all the way around to the boundary fence of the existing Administration building.
(6) Making necessary repairs to the existing sub-surface drainage system.
(7) Construction for 31th Division Aviation Alabama National Guard buildings known as (A) Hangers A & B and (B) Community House, with necessary aprons, roadways, drainage and fencing.

The roadway from the Municipal buildings around West side of field to site of National Guard buildings 3,787 feet long, twenty feet wide with 1,879.5 cu. yds. of soil removed and slag placed, was completed with eight inches of slag surface, but due to the inacesibility [sic] of a steam roller up to the cessation of CWA, it had no final surfacing.
The rip wall on each side of the present drainage ditch at the West side of the field was completed, and a section of the North side of the field from the West side of the culvert under Hanger A and its aprons for a total distance of 2, 401 feet, and had an average thickness of 2 1/4 feet and 4 feet in height. This left 520 feet of the ditch which was
not rip-rapped. The ditch from the East end of the culvert extending approximately 2,2 ft. and under East Lake Boulevard, was straightened and the side walls from twelve foot bottom width completed at a 2 to 1 slope with 7,491 square yards sprigged with Bermuda grass, using 52 cu. yards of fertilizer. Curtailment of quota prevented rip-rapping the bottom and two feet on each side of the ditch.
No trees were cut on the acreage South and West of the present Municipal Hangar as of March 31st, 1934.
The area South and west of the Municipal Hangar Building was filled with approximately 1,900 cu. yds. of dirt from the roadway excavation mentioned above .
Extending from the Southeast corner along the entire east side of the field a rip-rap gutter 6 ft. Wide and 1.85 ft. deep was constructed between the road and the parking area for a distance of 3,836 feet, using 1,574 cubic yards of rip-rap. The parking area was covered with 5,243 cubic yards of rip-rap. The parking area was covered with 5,243 cubic yards of slag 75 feet wide, 3,775 feet long and nine inches deep. The ditches from East Lake Boulevard to the main ditch along the outside of the fence had 11,657.8 cubic yards of dirt removed which was used as fill on the building site and the area Westward. The excavation and fill on the North side of the field consisted of 8,930 cubic yards.
Only a small amount of work was accomplished on the existing subsurface drainage system as compared to that originally planned.
Construction on the Community Building had not begun at the dissolution of CWA, however, construction on the Hangars progressed to a fair degree. All the reinforced concrete footings were placed (excavation mentioned above) and a 6’x6′ reinforced concrete culvert 411 feet long constructed, which receives and discharges the water from the main ditch running along the north side of the flying field, all of which consumed approximately 800 cubic yards of concrete.
All the exterior walls of Hangar B were brought up to the lean-to roof slabs and all walls of the North lean-to of Hangar A almost to the second floor slab with the exterior walls of the South lean-to of Hangar A to approximately four feet above the finished grade.
The steel sash was installed complete in Hangar B and the North lean-to of Hangar A, with the electrical conduit, panelboards, plumbing and heating roughing built in.
The roof slabs to both lean-to’s to Hangar B were poured compete, using 140 cubic yards of reinforced concrete.
All concrete sills for Hangar B and most of those for Hangar A, totalling 120, were cast on location but not placed at cessation of CWA activities. The 144 lineal feet of concrete coping for Hangar B was cast on site but not placed.
For detailed information, blue prints and specification soo complete report filed in office of State Aviation Advisor.

“A hanger, shop, garage, groundwork, runways and lighting were built at the Birmingham Municipal Airport.” by the WPA. For the National Guard;” At the Municipal Airport, an administrative building, taxiways, and a hanger were built. Armory additions, truck sheds, and rifle ranges were also built at locations not identified.” The Army Air Guard moved into their facility in 1938 after 4 years of construction.”

This author couldn’t reach anyone at the National Guard to determine if the original buildings are extant. 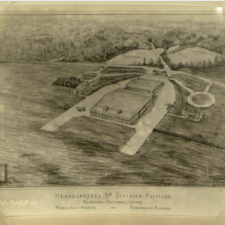 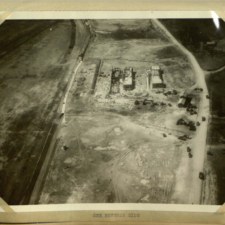 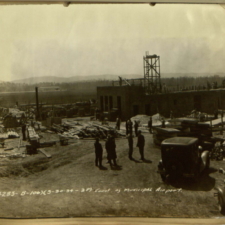 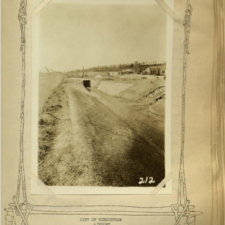 Project originally submitted by Andrew Laverdiere on May 17, 2022.