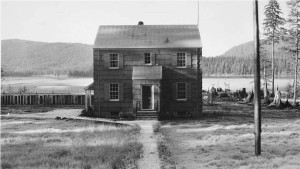 From The Fur Farms of Alaska: Two Centuries of History and a Forgotten Stampede: “In 1937, the legislature responded by appropriating $20,000 to establish an experimental fur station near Petersburg on land to be selected by a committee of three— Governor John Troy, B. Frank Heintzelman from the Forest Service (which contributed thirty-five acres of land), and Frank Dufresne of the Biological Survey (which granted $4,000 for research equipment)… The site chosen by the committee was cleared of trees by the Civilian Conservation Corps. The Public Works Administration awarded a building grant and oversaw the building contractor. The new farm was designated Substation 2 of the Agricultural Experiment Station at the University of Alaska, the new name for the institution headed by Charles Bunnell… Work began on the Petersburg station in the spring of 1937. The contractor erected a two-story, saltbox-style central building with a laboratory, library, offices, and a three-bedroom apartment for the superintendent and his family” (pp. 129-131). A photograph on p. 131, also from the University of Alaska, Fairbanks archive, shows the newly constructed office still bearing a PWA placard, dated 1938.

The station closed in 1974. It is unknown whether the original building still stands, or its precise location.

Location notes: Location is estimated based on current satellite imagery and historical photos, not precise