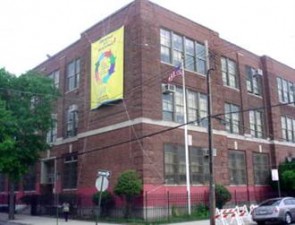 The school was described by the WPA in 1940: “Will serve the Red Hook Housing Project, was completed in June, 1940. A three-story U-shaped building of colonial design of red brick with granite base and limestone trimmings. Replaces a school built in 1869. Features include a playroom 130 feet by 30 feet, lunch room and kitchen, 22 air-conditioned class rooms, each seating 42 pupils. Radio equipment will pick up the Board of Education’s proposed ultra high frequency programs and the regular broadcase programs of the municipal broadcasting station, WNYC. All class rooms have individual speakers. The cost was $673,488, of which the city’s contribution was $355,000.