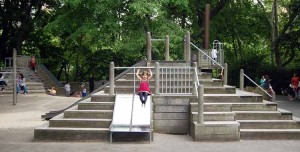 On May 4, 1936, the Department of Parks announced the opening of “three new perimeter playgrounds for children of pre-school age” in Central Park. One, at 68th St. and Central Park West, appears to be what is now known as Adventure Playground.

Although the 1936 press release does not mention the WPA or other New Deal agencies, the New Deal transformed much of Central Park in the 1930s. Furthermore, researcher Frank da Cruz explains here that almost all New York City Parks Department projects between 1934 and 1943 were accomplished with New Deal funds and/or labor, and that after April 1935, the WPA quickly became the main source of this support.

The playground was recently rehabilitated in a project that “re-created play features from the original playground that were lost over time, while adding fun new features for children to enjoy.”   (www.centralpark.com)