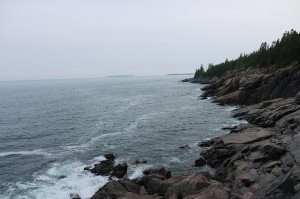 “Across the country, natural resources were being lost to poor conservation, heavy use, and severe drought. In Maine, one of the newer national parks was struggling. Even though Acadia National Park had been created 17 years earlier, it was still rural, small, and undeveloped. Most areas were overgrown and inaccessible, and the facilities were inadequate for the park’s large number of visitors.

Superintendent George Dorr desperately wanted to develop the area and saw a huge opportunity in the CCC. He petitioned Roosevelt for a camp to be stationed at Acadia. His wish became reality when one of the program’s earliest camps was established at Eagle Lake, the current site of park headquarters. Soon a second camp was established near Southwest Harbor, the Great Pond Camp. Out of more than 4,000 camps that would eventually be created, only 100 would run the entire span of the program, including the two on Mount Desert Island.

During the nine years the CCC was stationed at Acadia, they completed hundreds of projects. The majority of these were in forestry, such as fire fighting, fuel reduction, and disease control. The “boys” also performed most of the work in constructing the park’s two campgrounds, Blackwoods and Seawall. Their most enduring and endearing successes, though, are the stunning and unusual trails that lead hikers into the heart of Acadia, such as the Ocean Path and Perpendicular Trail. Granite blocks weighing more than a ton were carefully cut and laid by hand. Thousands of dead or downed trees were cleared. The work was hard, but fulfilling, and through their efforts, the CCC opened, protected, and beautified Acadia National Park.”