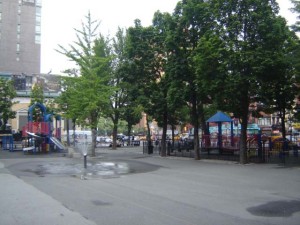 This small playground on Houston St. between Essex and Norfolk was constructed by the Department of Parks in 1934 as a playground for small children. According to the press release announcing its opening, it originally contained “a shelter house, basketball courts and complete playground apparatus,” and was one of 38 new play areas “completely equipped with modern recreational facilities, which have been added to the park system during a period of four months by the new administration.” The playground took on its current name after a major renovation in October 1998. The name “reflects both its location at the northern edge of Alphabet City and its proximity to Public School 20” (NYC Parks).

The site had previously been an abandoned school building (P.S. 13), which the city turned over to the Parks Commissioner for demolition by a Civil Works Administration (CWA) crew.

Although these sources do not explicitly mention federal involvement in the park, federal funding for laborers, materials, architects, landscapers and engineers employed on Parks projects is acknowledged in about 350 press releases from 1934 to 1943. As researcher Frank da Cruz explains here, from these and further sources, it can be confidently stated that all New York City parks projects from 1934 to 1938 and almost all from 1939-1943 were completed in whole or in part with New Deal funding and/or labor.

Given the early date of the ABC Playground project, the CWA most likely played an important role in its development. From 1935 on, the WPA became the primary agency involved in NYC park development. A December 1943 Parks Department press release summed up the massive amount of work accomplished on playgrounds alone with federal funding by the end of the New Deal era, saying, “In 1934 there were 119 playgrounds in the five boroughs, 67 of which have been reconstructed. There will be, with this new addition [of a playground on Brinckerhoff Avenue in Queens], 489 playgrounds in the park system.”