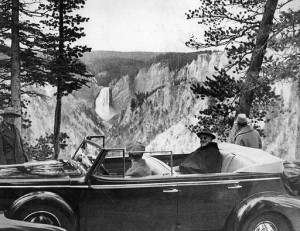 Five days before Pearl Harbor, and anticipating American involvement in a world war, Franklin Roosevelt forced the Tenth Mountain Division to abandon a $25 million training site in Henry’s Lake, Idaho–because the site was also a breeding ground for trumpeter swans. “The Army must find a different nesting place!,” FDR wrote to Secretary of War Henry Stimson. On September 17, Douglas Brinkley, Professor of History at Rice University and a fellow at the James Baker Institute for Public Policy, delivered a speech at the University of California, Berkeley’s Department of Environmental Science, Policy, and Management, entitled, “Forester in Chief: Franklin D. Roosevelt, the CCC and Wild America.” (A book-length study, entitled Rightful Heritage: Franklin D. Roosevelt and the Land of America, will be released in March, 2016.)

Prof. Brinkley’s talk spanned the Roosevelt family’s legacy of nature preservation; FDR’s love for the “sanctified landscape” of his native Hudson River Valley; preservation efforts on the East Coast (and not just cousin Teddy’s beloved West); the influences of grass roots activism on federal policy (including the closure of the training site in Henry’s Lake); and a legacy of governmental involvement in, and protection of, nature that is unprecedented in American history (and was quickly squandered by President Truman’s focus on Cold War resources, especially off-shore drilling). It’s filled with fascinating tales of FDR’s work as “Forester in Chief” while not shying away from major missteps, including sexism and segregation in the CCC. Watch the entire talk here.