Popular Chronicle columnist Leah Garchik gave a nice shout-out to Gray Brechin for being honored by the California Book Club and called attention to the Living New Deal’s just-issued New Deal map of San Francisco.  Here’s what she said, in full:

“Gray Brechin, who on March 30 will receive the California Book Club’s Oscar Lewis Award for contributions to Western history, will have on hand copies of the spiffy new San Francisco Guide to Art and Architecture of the New Deal, a brochure that identifies New Deal projects around the city. This is a project of the UC Berkeley Department of Geography, which hopes to create similar brochures for other cities about the country. There are more than 300 New Deal projects in the Bay Area, including 11 in Golden Gate Park. More information is at www.livingnewdeal.org.”

Thanks to Leah for the recognition, even if she got a couple things a tiny bit wrong: the 300+ New Deal sites are just in the city of San Francisco alone and the SF map is a project of our non-profit in Berkeley.  The original column can be found in the March 18th edition of the San Francisco Chronicle on page E8 (the back page of the Datebook section). 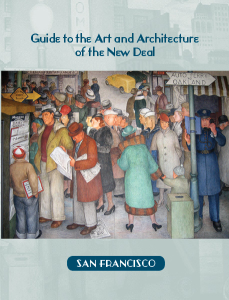