The Living New Deal and National New Deal Preservation Association received a nice tip of the hat from a trade journal called Government Product News, a magazine serving some 20,000 local government officials around the country.  They contacted LND’s Harvey Smith for some examples of WPA buildings and then posted this paean to public works produced by the Works Progress Administration.  Editor Michael Keating of GPN reports a strong response from the readers of the website and their newsletter.  Thank you, Mr. Keating! 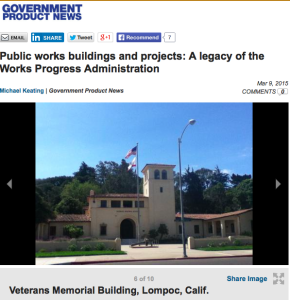