Living New Deal & NNDPA board member Bob Leighninger has a fine intervention on the folly of austerity in a recession, on the Roosevelt Institute’s Next New Deal blog.  He tries to spell out the errors of the conservative position in clear language the public can understand.  Check it out at http://www.nextnewdeal.net/rediscovering-government/demand-deficit-and-denial-simplified-case-against-austerity 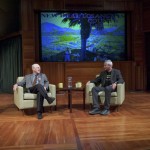 Gray Brechin appeared recently in a hugely successful forum at the L.A. Public Library with writer and bookseller David Kipen.  He was asked to follow up with this piece on the Library Foundation blog:   Gray Brechin Excavates the New Deal in Southern California

Gray Brechin reminds the people of Berkeley of the days when the New Deal helped get the city through the Great Depression with millions of hours of free labor that, among other things, planted up the city’s streets with thousands of flowering fruit trees.  See the full article in The Berkeley Daily Planet, March 27, 2012.

Living New Deal scholar Gray Brechin was interviewed about the dumbing down of education on “In deep with Angie Coiro” on March 3, 2012.  During the Great Depression, by contrast, the Roosevelt Administration put people to work building schools and teaching.  A podcast of the interview can be found here.

The dogged pursuit of this story by the Living New Deal’s Harvey Smith, who is also president of the National New Deal Preservation Association, paid off in national news coverage of the horrible blunder of the University of California, Berkeley, in selling off a million dollar New Deal artwork for peanuts.  Here is the New York Times story and here is our own post on the matter.

Living New Deal Project Scholar Dr. Gray Brechin participated in a discussion of the Coit Tower murals, the first New Deal murals in the United States, finished in 1934.  Listen to the podcast on Forum at KQED 88.5FM (San Francisco).

Sam Redman, of the Living New Deal team, takes on Newt Gingrich’s proposal to fire school janitors and replace them with school kids.  Redman recalls the New Deal’s National Youth Administration, a constructive program that helped millions of kids in the 1930s and that could be replicated today – but not if Gingrich becomes president!

Read the Article: The Right Way to Put Kids to Work – NY Times

Marty Bennett and Richard A Walker argue the case for reviving the New Deal in the face of mass unemployment today.  One version appeared in the Santa Rosa Press Democrat, October 15, 2011 and a longer version was posted on labor and progressive websites in the Bay Area.

Bennett teaches American history at Santa Rosa Junior College and is co-chair of the Living Wage Coalition of Sonoma County. Richard A Walker is a professor of geography at UC Berkeley and research director of the Living New Deal.

A 71-year-old lode of San Francisco history is looking for a home.

It’s a three-dimensional scale model of San Francisco, built of wood by the Works Progress Administration and presented to the city in 1940. It was an extraordinary freeze-frame of what San Francisco looked like just before World War II, and it measured 41 by 37 feet when it resided at City Hall.

While Mercedians may know about some of the projects paid for by the current stimulus — the repaving of 16th Street and school improvements, for example — much of the legacy of the New Deal in Merced County is still standing, yet unnoticed. From recreational facilities and the beach at Lake Yosemite, to the murals in Merced’s downtown post office, much that was built during the 70-year-old New Deal is still standing strong.

Read the Article: The New Deal in Merced County
By Jonah Owen Lamb | Merced Sun-Star | May 1, 2010

In 1940, Eugene A Delorenzo was just 17 years old when he boarded a train bound from New York City to rural Idaho after his father suggested he sign up with the Civilian Conservation Corps (CCC), one of the public works programmes launched by president Franklin D Roosevelt’s New Deal in response to the Great Depression.

Read the Article: Old Glories of New Deal Still Chime In A Time of Crisis
By Mary O'Hara | The Guardian | March 10, 2010

From the Tennessee Valley Authority to the federal theatre project, Roosevelt’s’ New Deal of the 1930’s dramatically altered America’s infrastructure in lasting ways. Now President Obama wants a New Deal too –– only this one is green. Obama plans to create more than two-and-half million “green” jobs over the next two years. But will these jobs be as plentiful and equitable as the new administration will have us believe? On this edition, we look at the greening of America. Is it really a new deal for everyone?

To listen to the interview, follow the link below:

Read the Article: The Greening of America: A New Deal for Everyone?
National Radio Project | June 24, 2009

Everything David Wallace knew about the Great Depression of the 1930s assured him that it would never happen again.

Like many people, he thought regulations and protections were put in place to control Wall Street and the nation’s banks, such as the U.S. Securities and Exchange Commission and the Federal Deposit Insurance Corp.

Now, as a history student at the University of Southern Maine, Wallace is studying the Great Depression at a time when the United States is in the midst of an economic crisis. Wall Street and the banking industry are in shambles, rocked by a mortgage crisis with worldwide reach.

Read the Article: Touched by the New Deal
By Kelley Bouchard | The Portland Press Herald | March 11, 2010

Works projects administered by the federal government during the 1930s left their presence in Auburn. Michael Otten, president of the Placer County Historical Society, researched some of those “alphabet soup” programs in the most recent issue of the museums division’s The Placer newsletter.

“Start with the restored Cooper Amphitheater in the newly opened Auburn Park Preserve behind Auburn City Hall,” Otten writes. “A short distance away is the Earl Crabbe Gym and much of the wall work around Placer High School.”

Otten goes on to mention not only New Deal-era city halls built in Auburn and Roseville, but tennis courts to Dutch Flat, the Colfax Elementary School and much of the Gold Country Fairgrounds.

The gym, an art deco classic like nearby city hall in Auburn, was constructed as a public works project in 1937 along with the original cinder track at what is now the track at Ralph LeFebvre Stadium. It was named after educator and basketball coach Crabbe in 1951.

“It’s amazing how much was done,” Otten said. “It kept a lot of families clothed, fed and sheltered during the hard times of the Depression.”