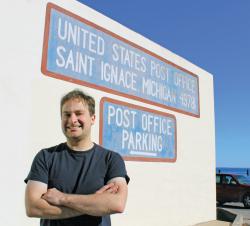 Evan Kalish has been featured in Michigan’s St. Ignace News.  The paper recognized Evan for his incredible work visiting and documenting post offices across the country.  Evan has visited 8,450 post offices in nine years, in all 50 states.  He chronicles his journeys on his blog, Postlandia.  The paper specifically featured Evan’s work in the Upper Peninsula of Michigan, including St. Ignace and Mackinac Island.  Click here for the complete story.

The Living New Deal was featured in The Herald Journal of Logan, Utah.  An article written by John Zsiray highlighted the Living New Deal as a source identifying many New Deal sites in northern Utah’s Cache Valley.  Read the full article here.

In an article authored by Trudy Goldberg, the annual labor issue of Dollars & Sense highlighted the Living New Deal and the New York City map.  Read the article here at pages 6-7. 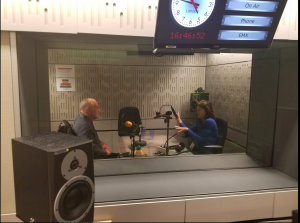 The BBC interviewed Gray Brechin and Brent McKee for a documentary it is producing on the New Deal.  The piece will be broadcast in November.  Stay tuned!

The Week featured the Living New Deal by recognizing “The astounding provenance of New Deal projects, in 1 eye-popping map.”

“Curator Harvey Smith said on Thursday that he would like to show immigrants to the United States through a different [lens]. ‘This exhibition is about immigration, pluralism and internationalism, and I hope that the contributions of these immigrants can be recorded rather than forgotten in history.'” Read the World Journal‘s full coverage of the “Building Bridges, Not Walls” exhibition, curated by Living New Deal Project Advisor Harvey Smith, in its English translation (and in the original).

“Norwood was once home to mainly those of Jewish, Irish, and Italian descent. Today it’s one of the city’s most diverse neighborhoods. All nationalities, races, ages, cultures, and religions come to Oval Park. To play, to socialize, to exercise, to relax; for romance, for picnics, and for special events. I believe that it’s one of the best utilized spaces in the whole city, every nook and cranny is used… except the bocce court! Everybody gets along, everybody watches out for everybody else.” New York-based Research Associate Frank da Cruz calls upon us to properly commemorate Oval Park, a WPA project in the Bronx that turns 80 this summer. Read more about the park’s history, the role it continues to hold in the community, and the importance of marking this site for posterity in his opinion piece for the Norwood News.

“From schools to murals and zoos, many of the projects created by the New Deal still exist today. According to Living New Deal, a team dedicated to keeping the legacy of the New Deal alive, New York received the most New Deal public works in the country and was the beneficiary of prominent projects such as the Triborough Bridge, LaGuardia Airport, and Riverside Park. And now, you can see some of the locations of these projects with Living New Deal’s New Deal New York map! They’ve mapped about one thousand locations (and there are still more being discovered).” In Untapped Cities’ “Mapping the New Deal in Each NYC Borough,” Stephanie Geier provides a detailed breakdown of our New Deal New York map.

“Scanning the horizon of New York and beyond, New Deal sites number in the hundreds of thousands, most of them still in use today and almost none of them marked. There is the equivalent of a Lost Civilization out there waiting to be discovered. No one had ever documented everything the New Deal built or improved, until the Living New Deal was founded a decade ago to uncover the hundreds of thousands of public works across the country and map them, so that all Americans could see for themselves what was accomplished by their grandparents.” Read Richard A Walker’s entire Brooklyn Rail essay about how “The New Deal Lives On in the City” and our new pocket map honoring this legacy.

“The New Deal embodied an approach whose starting point was to make attacking poverty – not the people who live in it – a first principle. This makes it especially salient today… The writer and scholar Gray Brechin, a driving force behind the Living New Deal project, argues that at a time when Republicans in America and Tories in Britain behave as if there were no alternative to shrinking welfare states, and when ‘the dominant meme is that government just wastes money’, it is important that this ideology is exposed for the fiction that it is.” Read Mary O’Hara’s article, examining “lunch-shaming,” the “deeply flawed narrative that we can’t afford” the poor, and The Living New Deal’s attempt to commemorate a different vision of society.

Read the Article: In The Guardian, Gray Brechin on Poverty Shaming
By Mary O'Hara | The Guardian | May 2, 2017

Nice press from the Cumberland Times-News, in anticipation of Research Associate Brent McKee’s talk at the Washington Street Library in Cumberland, Maryland. If you’re in the area on Feb. 6, come hear “Discover the Hidden History Around You.” For more information, contact Joni Reed at [email protected]

“‘It’s all falling into ruin now because we decided we didn’t have to maintain it,’ says Gray Brechin, geographer and founder of the online archive The Living New Deal, ‘Thank god, they built it all as well as they did.'” Popular Mechanics examines how the New Deal shaped our nation and compares it to President Trump’s promises.

“‘You’ve got to think in terms of long-range investment and realize that these things are paying us back in lots of different ways,’ says Robert Leighninger, author of Long-Range Public Investment: The Forgotten Legacy of the New Deal. ‘Education, health, and recreation—all the stuff whose value is hard to calculate is important to our national well-being.'” Another shout-out to The Living New Deal and its team from Curbed, assessing the legacy of New Deal infrastructural projects in today’s political climate.

Read the Article: The Legacy of New Deal Projects and Trump
By Patrick Sisson | Curbed | Jan. 19, 2017

“‘It was really a quantum leap forward for the entire United States,’ says Gray Brechin, an author who helps run the Living New Deal. ‘By building this vast physical and cultural infrastructure, the New Deal brought the country into the mid 20th century.'” With the help of The Living New Deal, Curbed, a website devoted to the built environment, lists its top ten New Deal architectural sites.

On  Thursday, Dec. 22, at 1 pm EST, Gray Brechin will be featured on Pat Thurston’s long-running show on KGO-FM. Tune in to hear Gray discuss The Living New Deal and the Bay Area’s New Deal legacy.