Economist Darrick Hamilton mentions the Living New Deal in a conversation with Democracy Now! About pushing the next administration to the left. Listen to the segment here.

The Living New Deal was mentioned in an Article from Labor Notes. Titled, “In the Face of Mass Unemployment, We Need a 21st Century WPA” and authored by Max Page, the article calls for a new Works Progress Administration. Read the story here.

The Living New Deal was mentioned in the Wisconsin Examiner in a story that highlights the letter to Joe Biden by the New Deal descendants. Stephen Seufert, a descendant of New Dealers, stated for the Wisconsin Examiner that he and others get a “group together to remind Biden and the country of the New Deal’s enduring legacy […]” Seufert mentioned that “[0]ver the years, I’ve been particularly inspired by historical organizations like the Living New Deal, which have researched thousands of New Deal projects throughout the country.” read the story here.

Living New Deal Director Richard A Walker, and Living New Deal Board members Robert Reich and Price Fishback, were quoted in Bitterroot Magazine. Authored by Jake Bullinger, and titled, “The Marriner Doctrine: How a Utah Banker Tackled the Great Depression,” the article examines the COVID-19 recovery through the lens of the precedents set by the New Deal.

Rose Aguilar spoke with Living New Deal’s Gray Brechin and Richard A Walker for the May 14 edition of Your Call on KALW. Walker and Brechin reflect on the state of the country and the unfolding crisis to argue it’s time for a New New Deal.

Listen to the interview here.

Living New Deal Director, Richard A Walker, was quoted in a piece published in the Morning Call. The story explores how the New Deal can serve as a model for the coronoavirus recovery plan. Read the piece here.

The Living New Deal was mentioned in an article titled, “From murals to stadiums, the New Deal left a legacy of public projects surrounding us today,” published in the Boston Globe. Our Massachusetts National Associate, Fern Nesson, was interviewed for the story.

Living New Deal Director Richard A Walker was interviewed on KPFA on April 22 for a segment on Against the Grain. Titled “The Global Economy, Climate Change, and Covid 19,” the segment was a conversation about the COVID-19 pandemic, the unfolding economic crisis, and the need for a new New Deal. Listen to the segment here. 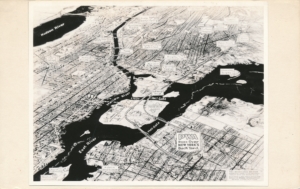 In an op-ed in the New York Times, David Leonhardt looks to the New Deal to argue that we need to build support for government institutions by highlighting its achievements. Read more here.

Last month, Sunrisers joined millions of people around the world for the Sept 20th #ClimateStrike–the biggest demonstration for climate justice in history. Now, it’s time to talk about what’s next for Sunrise.

One part of Sunrise’s upcoming strategy is our work to elect champions for our generation to Congress and the White House in 2020. There will be much more to say about that soon.

The other part is what we’re announcing today: three enormous waves of youth-led strikes that will make an unavoidable and unmistakable case for a Green New Deal to the politicians that will enter office in 2021.

Before I get to the dates, I want to talk for a moment about why we are calling for more strikes.

There’s a famous story that when FDR met with civil rights activists who sought his support for bold legislation, he told them: “I agree with you, I want to do it. Now go out and make me do it.” FDR understood that even though he wanted to act, he would face such fierce opposition that he wouldn’t really be able to pass bold legislation unless overwhelming public pressure forced it to happen.

We face this same situation today. Fossil fuel billionaires and their allies are fighting tooth and nail to block any climate action, and even sympathetic politicians are at risk of buckling to that pressure. So in order to win a Green New Deal, we need to create overwhelming public pressure that will leave our leaders with no choice but to act.

Mass strikes are our best bet to get there. Over the course of the next year, we’ll join with allies to hold three waves of youth-led strikes. At each one we’ll grow our numbers and our power, training new leaders who can in turn recruit more people to the next strike. By next December, just after the 2020 elections, we will have 10 million young people ready to take the streets and bring our political system to a grinding halt until we get a Green New Deal.

Our next strike will be on December 6th, 2019. A year out from the 2020 election, Sunrisers across America will join a national #ClimateStrike to take the momentum from September to our elected officials’ doorsteps. This will follow a global day of action on November 29th, Black Friday, when our allies will be striking around the world.

After that, we will strike on April 22nd, 2020: the 50th anniversary of the first Earth Day, when 20 million Americans participated in the largest nationwide protest ever, leading to the creation of the Environmental Protection Agency, the Clean Air and Water Acts, and more. We’ll echo that historic moment with the biggest youth strike this country has seen in decades.

Then, just after the 2020 elections, 10 million of us will take to the streets in the biggest strike yet. This won’t just be a single rally or march–this will be multiple days of continued strikes from school and work, of taking over politicians’ offices, of bringing the call for a Green New Deal to every community in America. This is the time when our next President and Congress will be setting the agenda for their first 100 days in office. Our pressure will ensure the Green New Deal has to be their top priority.

That’s the plan. What do you think? If you’re ready to be a part of it, there’s work to be done starting now. Pledge to organize a strike in your town on December 6th and show politicians that the Sept 20th strike wasn’t a one-off event: we’re ready to keep striking until we get a Green New Deal.

Here’s the bottom line for me. It’s not enough to speak out any more – to just rally when it’s allowed. We need to bring business as usual to a screaming halt before the climate crisis does, using the most effective tools at our disposal.

After the Global Climate Strike, it’s clear that our movement is ready to do that.

Leo Strine, Chief Justice of the Delaware Supreme Court outlined a proposal for corporate America that would renew America’s commitment to the original New Deal and worker’s rights.

The proposal seeks to “promote fair and sustainable capitalism and help business and labor work together to build an American economy that works for all.”

The George Washington High School Alumni Association has been an active opponent of the San Francisco School Board’s plan to paint over the Arnautoff murals. This week, the group has filed a lawsuit claiming that the San Francisco Unified School District’s decision violated state law.

In a statement about the lawsuit, the George Washington High School Alumni Association noted that, “The mural is a protected cultural, aesthetic, historic, and educational resource in a landmark high school.” 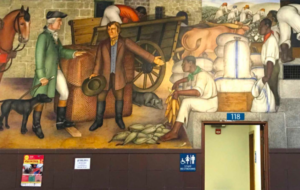 Robin D. G. Kelley is a Professor of American History at UCLA and is completing a book on journalist Grace Halsell.

In a piece for The Nation titled, “We’re Getting These Murals All Wrong,” Robin D.G. Kelley makes a case for using the Arnautoff murals to reflect on the specter of white supremacy in America’s democratic tradition. Kelley, major African-American scholar and critic of white supremacy, also unpacks American progressivism and its ineffectiveness in tackling inequality. He concludes the piece by focusing on how the School Board used the concept of “reparations” to explain the high cost of the murals’ removal.

“I find it ironic that Mark Sanchez, the vice president of the school board, used the word “reparations” to describe the $600,000 cost of the Arnautoff murals’ erasure. In doing so, he not only perverts the concept of reparations but also fails to see that precious funds that could have been invested in arts education or an anti- racist curriculum will be used to cover up a work that actually makes a powerful case for reparations by revealing how white liberty and the wealth of the new nation were built on slavery, colonialism, dispossession, and genocide. Certainly, students can learn this in their classrooms, and they can see it in the streets of San Francisco as rising rents and corporate land grabs continue to displace poor black and brown people in the city.” 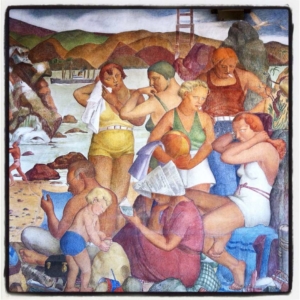 In a San Francisco Chronicle September 7 story, Gary Kamiya examines the built legacy of the New Deal in the San Francisco Bay Area. During the Great Depression, the Works Progress Administration put Americans to work on the nation’s infrastructure. Kamiya examines not only the extent of this massive program, but also the ways in which it included underrepresented minorities and the disabled into the work force. Read the story here.

Photo: “Detail of the Lucien Labaudt murals in the lobby of the Beach Chalet.” Catherine Bigelow / Special to The Chronicle.