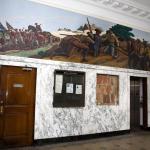 We were very pleased that the Living New Deal was acknowledged in a wonderful opinion piece in the Boston Globe on the day after Thanksgiving.  In an editorial entitled, “When public buildings were revered”, writer René Loth captures the spirit of the New Deal in asking why Americans no longer value public places as they once did and deplores the privatization of the New Deal legacy.  “We have traveled a long way from a time when public buildings were revered precisely because they belonged to everyone.”

We particularly liked this observation:

“Sturdily made, architecturally significant, the New Deal’s public buildings project a sense of authority and even grandeur, but with the clean, stripped-down lines of the Art Deco style. Even simple cabins in state parks creatively used natural materials to blend in with their settings. They are artifacts of a time when government institutions — schools, courthouses, even waterworks — commanded a certain respect, and the quality of design and craftsmanship reflected that.”

And we appreciate that the article included the url of the Living New Deal website.