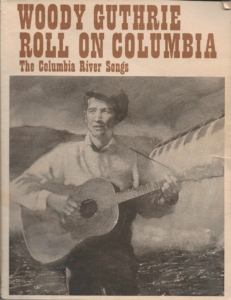 The Columbia River Songs
Guthrie wrote 26 songs during in his employment at BPA.Public domain

Woody Guthrie and his guitar sat in the backseat of a Hudson Hornet. Elmer Buehler, who worked for the Bonneville Power Authority (BPA), sat behind the wheel. It was May, 1941 and they were headed north from Portland, Oregon through Eastern Washington along the Columbia River, marveling at not only the stark beauty of the Pacific Northwest, but also at how the government was forever changing the landscape with massive hydro-electric projects—the Bonneville Power Administration in the West, the Tennessee Valley Authority in the East.

Before he became the legendary folk singer, Guthrie was an itinerant left-wing songwriter looking for work. He was hired by the BPA, created by an act of Congress in 1937 to construct the facilities necessary to transmit electrical power from the Columbia River Basin and market that power to the region’s towns, cities and states.

Guthrie was 28 and the father of three when signed on to write songs about the great public power projects: dams, locks, spillways, irrigation systems, generators. Guthrie’s friend, Alan Lomax, best known for his field recordings of folk music for the Library of Congress, had suggested Guthrie apply for the job. 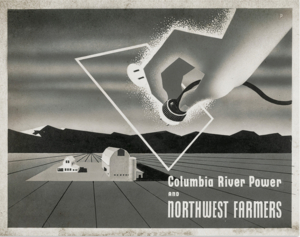 Farmers Poster
The Columbia River dams brought electricity and irrigation to the Northwest.
Photo Credit: The Bureau of Land Reclamation

“He sat there at the administrator’s desk…” Elmer Buehler recounted of Guthrie’s audition…and strummed his guitar…I don’t think he was there a half an hour and Dr. Raver said, ‘You’re hired.’”

They couldn’t get him on the (permanent) payroll, so they hired him for 30 days,” says Gene Tollefson, author of ‘BPA & the Struggle for Power at Cost.’” Guthrie earned a total of $266.66, which worked out to about ten dollars a song.

Guthrie had an explosion of creative output during the month-long assignment, arguably, the most important in his artistic life. He turned out 26 songs. “I pulled my shoes on and walked out of every one of those Pacific Northwest Mountain towns drawing pictures in my mind and listening to poems and songs and words faster to come and dance in my ears than I could ever get them wrote down,” Guthrie would later recall. 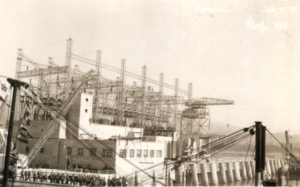 Bonneville Dam under construction, 1939
Guthrie’s lyrics: “My children won’t run away to town since Bonneville brung the ‘lectric lights around.”

“Roll on Columbia,” “Grand Coulee Dam,” “Pastures of Plenty” and “The Biggest Thing That Man Has Ever Done” are but a few of the now iconic songs Guthrie managed to write down during his brief tenure as a federal worker.

New Dealers were adamant that the people would be better served if electricity was produced by the federal government rather than local power utilities. That idea, the BPA held, would be made more palatable to the public through song. 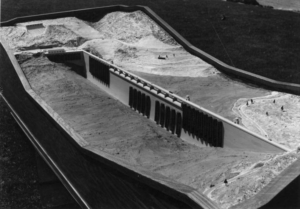 Scale Model of Grand Coulee Dam, 1938
The US Army Corps of Engineers was one of many federal agencies involved in the Columbia River Basin Project.
Photo Credit: University of Idaho Library Special Collections and Archives

Guthrie and Buehler drove along the blue ribbon of the river, stopping at construction sites and migrant camps, Woody writing about the benefits the dams would bring to the Northwest, songs later featured in the movie Columbia River Songs.

It had taken Guthrie but half an hour to get a job, but that job created music still as powerful today as the electricity that churns out of the Columbia River dams. Guthrie drew little distinction between the vast bureaucratic enterprise of harnessing the river’s power and the hardscrabble men and women making good money doing the hard and dangerous work.

Reviewing Greg Vandy’s 2012 book “26 Songs in 30 Days,” music critic Paul de Barros wrote: “Guthrie saw the Grand Coulee project as a Rooseveltian populist endeavor that would not only bring electric power to the people — much as the Tennessee Valley Authority project had — but also irrigate a gigantic “pasture of plenty” east of the Cascades, which could accommodate the Dust Bowl refugees whose plight he and John Steinbeck had brought into public focus.”

In “Grand Coulee Dam” Guthrie sings, “Uncle Sam took up the challenge in the year Thirty-three/For the farmer and the factory and all of you and me/He said, ‘Roll on Columbia. You can ramble to the sea/But river while you’re ramblin’ you can do some work for me.”

The dams constructed on the Columbia permanently altered the character of the river.

Woody’s son, Arlo Guthrie, once said of his father’s month-long stint, “He saw himself for the first time as being on the inside of a worthwhile, monumental, world-changing, nature-challenging, huge-beyond-belief thing…It’s rare you get a chance to participate in something you know is bigger than you and your country.”

Buehler drove Guthrie drove back to Portland. Woody Guthrie went on to become one of the most influential folk singers of the 20th century. He wrote more than a thousand songs, including those penned along the Columbia River.

His music is bigger than him, bigger even than this country.

One comment on “Powerful Music. Woody Guthrie and the Bonneville Power Authority”