Dr. Francis O’Connor penned this open letter in protest of the sales of post offices across the country — and the public art contained therein. Dr. O’Connor is the dean of New Deal art studies, and is largely responsible for the rediscovery and scholarly study of federally-sponsored art programs of the 1930s when they were much out of fashion in the 1970s. His letter counts for a great deal, not only in protecting those endangered PUBLIC possessions but in bringing their plight to the attention of the art press and the mainstream media, which have so far been entirely MIA as the USPS and CBRE have been hastily selling off our heritage with no cop on the beat.

AN OPEN LETTER ABOUT THE U. S. POSTAL SERVICE’S PLANS TO SELL OFF SOME OF ITS POST OFFICES — TO WHOMEVER IT MAY CONCERN:

The recent announcement by the United States Postal Service to sell off a number of old post office buildings around the country has raised serious concerns about the preservation of their architecture —and the murals and sculptures they contain. It is important to protest this policy, and to monitor any and all sales in respect to their impact on our artistic heritage.

These murals constitute a pictorial history of our country that was created by the Treasury Department’s several art programs on a national scale between 1934 and the mid-1940s, when the last contracts were completed after the war. Selling off old post offices is thus selling off part of this national heritage, and ought to be done — if it has to be done at all — with great care and awareness of both the history of our mural art, and of our Art Deco architecture.

I would urge all those presently engaged in assessing and protesting this move by the USPS, to consider landmarking important post offices and mural cycles. This has already been done in certain cases. But landmarking agreements must stipulate that the interiors of these buildings and their murals and sculptures be protected along with their exteriors. In those cases were agreements exist to protect art work, their implementation must be carefully monitored.

It would also be useful to approach any and all buyers of the post offices to alert them of their obligations in respect to these monuments from the past, and to inform them specifically about the murals in their buildings and the artists involved in their creation.

I regret that I cannot any longer take part in the campaigns foreseen, but I remain available to guide research into specific sites as necessary. I would urge you to read the material about the New Deal visual art programs and murals in my book The Mural in America, that was published as a website in 2010 at the address above. See Part Seven’s introduction, and at sections B and G. It re-tells the history of these 1,100 murals and gives a few pertinent case histories about Ben Shahn’s murals at the Bronx Central PO in New York (at B), and the Anton Refregier murals at the Rincon Annex PO in San Francisco (at G). — A list of the 1,100 New Deal murals in post offices can be found in Marlene Park & Gerald Markowitz, Democratic Vistas: Post Offices and Public Art in the New Deal, Philadelphia:Temple University Press, 1984, pp. 201-35.

Thank you for your concern, and make sure the USPS hears from you loud and clear about it. 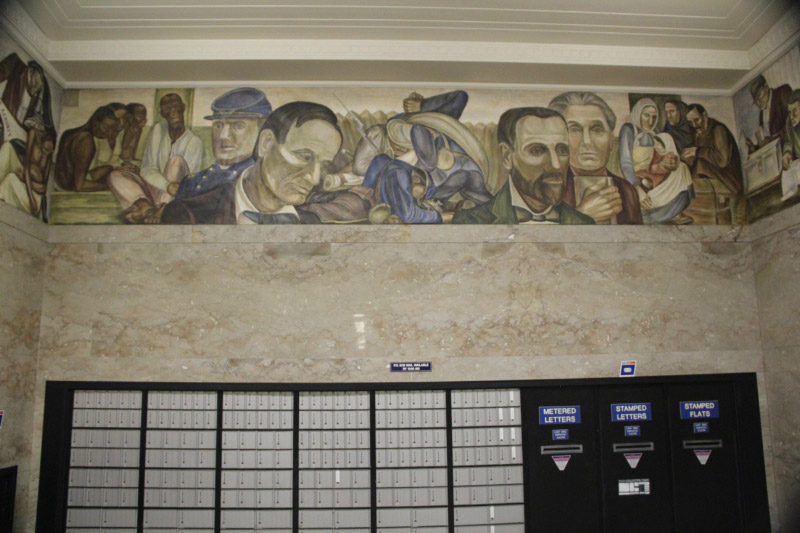