So a historian and an archaeologist went on the road awhile back to Lawrence County in southern Indiana to check out a wonderful WPA site equally of interest to both. As it’s deep into private property, I can tell you only that it was an abandoned dam, similar to, but larger than, one with which I was familiar in the same county, the dam that forms Anderson Lake. The WPA created some 400 lakes throughout the southern half of Indiana as flood and erosion control projects. They ranged in size from small farm ponds to the 400-acre Starve Hollow Lake in Jackson County. The majority were on private land but some, like Starve Hollow, were opened to the public.

Lawrence County is loaded with many WPA projects, most of which use the ubiquitous limestone for which the area is so famous. From quarries in this county came the stone for the Empire State Building and the Washington Cathedral, among many other landmarks. Some 40 years ago I was treated to a guided tour by Gerald Skinner, who had worked on several WPA projects and was proud and eager to show them off! He was younger than most former WPA-workers, because he had married at 18 and thus was eligible to apply. He even showed me a WPA-built “Roosevelt outhouse” then still standing in the town of Oolitic!

In 1936 the WPA moved an unused interurban depot in Oolitic a block or so down the street to the schoolyard and faced it with said ubiquitous limestone. It was Oolitic High School’s bandroom for decades! Now it sits abandoned adjacent to the even more forlorn empty high school building.

Just south of Oolitic is the county seat of Bedford, where one of my very favorite WPA projects is hilly Otis Park on the edge of town, created from a defunct country club in those Depression days. The coolest structures in the park are four picnic platforms with built-in fireplace ovens, strung along the hillside below the road.

Well, in truth, the whole park is a gem, with numerous structures, crowned with a massive bandshell near the entrance, seldom used these days.

All of Bedford’s parks benefitted from WPA projects, but the most poignant and long-neglected are these reliefs by out-of-work stonecarvers that portray typical 1930s playground scenes in Thornton Park, most with structures in the background that no longer exist. The park has vastly changed since I first saw these reliefs 40 years ago, and they were clearly unappreciated even then. There are six different scenes, some of which are barely discernable after nearly 90 years of neglect.

From Bedford we traveled to the state’s first fish hatchery at Avoca, greatly expanded and improved by the WPA. The site was deaccessioned in 2018 and is now a community recreation area.

We ended our Lawrence County wanderings at Springville, where the WPA constructed a marvelous stone gym/community center next to the school. The school was closed and torn down decades ago; the gym remained, but was abandoned, for a very long time. Then in the 1990s the community got together and rehabbed it as . . . a community center! Alas, there was a terrible fire some years ago. I’m not sure, but it does seem that they may be trying to rebuild it.

The WPA was incredibly active in this county, which is not hard to understand when one considers it was the center of the limestone industry and hardly any private construction was going on. The WPA was a lifesaver to the men who, as Gerald Skinner pointed out, “couldn’t even buy a job.” This was only a sampling. 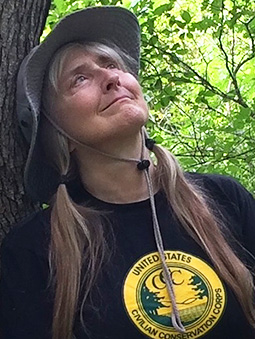