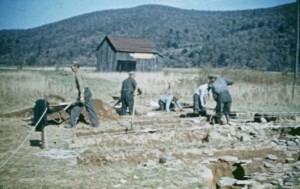 Glory-June Greiff writes us from Indiana:

We all know that the New Deal changed the landscape. It also preserved it, celebrating America’s history even as it was making history. Taking office in 1933, President Franklin Delano Roosevelt pledged a New Deal for America by swiftly enacting a plethora of alphabet agencies, including a series of ambitious federal work relief programs. The Civilian Conservation Corps (CCC) developed parks and aided conservation. The Works Progress Administration (WPA) and its predessors built roads, schools, airports, infrastructure and so much more. And, these New Deal programs also fundamentally transformed American archaeology.

WPA and CCC archaeology assistants (some of who went on to become archaeologists themselves) worked in nearly all the lower 48 states, patiently peeling back layers of dirt to reveal secrets of the country’s past absent from standard history books. Ordinary men and women from all walks of life undertook the task of excavating places of national and regional significance, such as Jamestown, Yorktown, Daniel Boone’s birthplace, and a range of colonial-era forts. Perhaps even more importantly, work relief archaeologists explored and uncovered camp sites, villages, towns, and mounds of the pre-Columbian American Indians, whose history was then little-known. In Indiana, WPA workers toiled at a site known as Angel Mounds under the supervision of archeologist Glen Black. Today, Angel Mounds is a State Historic Site.

Last month, in the laboratory at Indiana University named for Black, Dr. Bernard K. Means, Instructor of Anthropology at Virginia Commonwealth University, gave a public lecture entitled, “When Americans Dug Their Past: Doing Archaeology During the Great Depression,” part of the College of Arts and Sciences’ semester-long initiative, “Themester 2015: Work: The Nature of Labor on a Changing World.” A themester combines academic courses, public lectures, exhibits, film screenings, and other events with the intent of engaging students and the community at large in a collective learning experience about a timely, even urgent, issue. Dr. Means discussed with some wonderment the work of these untrained assistants who provided us with the foundation for so much knowledge, keeping their legacy alive even as they did so for our historical heritage at large.

Glory-June Greiff is a public historian, writer, and preservation activist based in Indianapolis. She began her research on the New Deal in Indiana over thirty years ago and continues to make new discoveries every year. In the early 1990s she served as statewide director of Indiana’s Save Outdoor Sculpture! (SOS!) survey, which provided the foundation for her book Remembrance, Faith and Fancy: Outdoor Public Sculpture in Indiana (Indiana Historical Society, 2005). Her most recent publication is People, Parks, and Perceptions: A History and Appreciation of Indiana State Parks, which emphasizes the role of the CCC and WPA in developing our state parks and creating our public perception of how such a park should appear. A native of Hudson Lake in northern Indiana, Greiff earned a B.S. in Radio-Television/English from Butler University and worked several years on the air in radio; she holds a master’s degree in Public History from Indiana University. She is also a professional narrator and a performer of song and story.