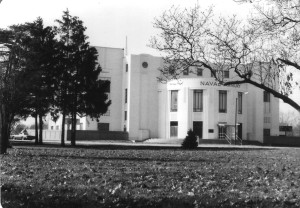 Featured in my 1980 publication, Art Deco in Indianapolis, the stunning WPA-built Naval Armory, the work of architect Ben H. Bacon, has graced the bank of the non-navigable White River since before its dedication in October 1938.

At the time I first wrote about it, the glorious Art Moderne building still somewhat served its original function and was gloriously intact outside and in, including the over-the-top nautical decor of the Officers’ Mess. The interior was originally fitted with a simulated navigation bridge and many other accoutrements of a naval vessel. Inside the drill room–essentially a large gymnasium–are four huge murals of famous naval battles by WPA artist Charles Bauerle.

The building was renamed the Heslar Naval Armory in 1964 to honor its first commanding officer, Capt. O.F. Heslar. In 1985, a humanities grant afforded me the opportunity to invite the public into the drill room for an illustrated talk on the WPA in Indiana in its 50th anniversary year. The building was functioning as a headquarters for both the Navy and Marine Reserve, and security grew much tighter, the public no longer able to enter so easily. The beautiful dining room became just another classroom, its adjacent curving barroom with the glass block counter abandoned. Seeing the interior a few years ago was disheartening, to say the least. The building was decommissioned last year and its fate was uncertain.

Enter Indiana Landmarks and the charter Herron High School (headquartered in the former Herron School of Art north of downtown Indianapolis), who have partnered to save the structure, rehabilitate it, and transform it into Riverside High School, another charter school that will follow Herron’s classical education model. It will open next year. Huzzah!

Glory-June Greiff is a public historian, writer of numerous books, and preservation activist based in Indianapolis. She began her research on the New Deal in Indiana over thirty years ago and continues to make new discoveries every year. In the early 1990s she served as statewide director of Indiana’s Save Outdoor Sculpture! (SOS!) survey, which provided the foundation for her book, Remembrance, Faith and Fancy: Outdoor Public Sculpture in Indiana (Indiana Historical Society, 2005).