France’s newly-elected president, François Hollande, is an admirer of the New Deal who   thinks that Europe needs economic stimulus of the kind provided by the Roosevelt Administration in the 1930s, not the austerity regime imposed on the European Union by German Chancellor Angela Merkel and the European Central Bank today.  (President Hollande is on solid ground, according to 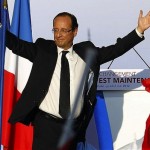 ).  The New Deal idea has been bruited in news articles in Le Monde and Le Nouvel Observateur, for example.  A notable development is the formation of a French collective resonating with the Living New Deal, called “Roosevelt 2012”.  Typically,   British and American press coverage of Hollande’s position in favor of higher taxes on the rich and more fiscal stimulus has been critical and dismissive, as in this article in Forbes.  The Anglo-American consensus is still all about austerity, budget cutting and the evils of Big Government.