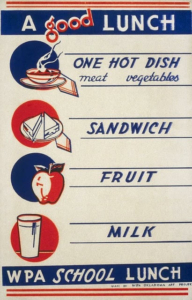 First Lady Eleanor Roosevelt was accomplished in many pursuits, but, according to the New Yorker, other than scrambled eggs she couldn’t cook worth beans. To show solidarity with those suffering during the Great Depression, upon moving in to the White House Mrs. Roosevelt eschewed fancy meals for more humble fare. She had hired her trusted friend Henrietta Nesbitt to oversee the kitchen. She proved herself a frugal manager. Meals were wholesome, if not appetizing, and penciled out at seven and a half cents per person, including coffee. Mrs. Roosevelt said that she and the President would be eating this way regularly. Ernest Hemingway, invited to dinner at the White House in 1937, said that the food was the worst he’d ever eaten.“We had a rainwater soup followed by rubber squab, a nice wilted salad and a cake some admirer had sent in.” The Washington Post lampooned a state dinner that featured sweet-potato casserole with marshmallows. A reporter described the food at a press luncheon (shrimp Newburg in patty shells and a prune Bavarian cream) as “abominable.” FDR knew the taste of excellent food and missed it badly. But he and Eleanor had agreed that she would run the White House and he would run the country.
With thanks to Lisa Curran Matte, tastingtable.com