National Public Radio’s Brian Naylor recently offered this terrific – but unsettling – piece about  all the art gone missing from the New Deal era, and the federal government’s effort to recover it.   So if anyone sees a suspicious tag at an antique shop….! 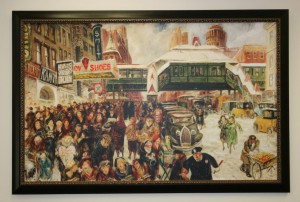 At the height of the Great Depression, President Franklin Roosevelt enacted a raft of New Deal programs aimed at giving jobs to millions of unemployed Americans; programs for construction workers and farmers — and programs for writers and artists. The GSA recovered Anne Fletcher’sIris Garden after its then-owner watched an episode of PBS’sAntiques Roadshow and realized the painting was actually a WPA piece.

In all, hundreds of thousands of works were produced by as many as 10,000 artists. But in the decades since, many of those works have gone missing — lost or stolen, they’re now scattered across the country.

A Transformative Time For American Artists

The biggest New Deal art program was the Works Progress Administration Federal Art Project. Artists could earn up to $42 a week, as long as they produced something.

Mecklenburg says it was a transformative time for the artists: “The idea for an artist to be able to work through a problem, to work through ideas, you know, that’s golden. So it was a very special moment, and one that really has not ever been repeated.”

To qualify for the work, however, you had to prove yourself as an artist and you had to show you were poor. Mecklenburg spoke to two brothers-in-law who were in the program.

She says, “One of them was saying, you know, you had to prove you were penniless — he said it hurt your dignity. And the other one was so cavalier and devil-may-care about it. He said: Oh, you know, if you thought the relief worker was coming to check out if you had an iron, or anything else that looked like it was of value, you just ran it over to the neighbor’s apartment so it looked like you didn’t have any possessions at all. It’s about as human a story as we’ve ever come up with in the art world.” The GSA’s Brian Miller holds Andrew Winter’s Gulls at Monhegan(click here for a closer look). The painting will be sent to the U.S. Embassy in Croatia as part of the State Department’s Art in Embassies program.

Every Recovered Painting Has A Story

Some of the art became famous — such as the murals painted in post offices and other public buildings across the country — but in the 80 years since the New Deal art programs began, many of the works have disappeared.

The General Services Administration, the federal agency in charge of government buildings, has a program to recover the lost art, which remains government property. GSA Inspector General Brian Miller says every recovered painting has a story.

Take, for instance, the seascape Gulls at Monhegan,painted by Maine artist Andrew Winter. “It hung in the [American] embassy in Costa Rica for years,” Miller says. “And the ambassador loved it so much that when he left, his staff gave it to him as kind of an unofficial gift. And so it remained in his family and then his granddaughter eventually tried to sell it up in Portland, Maine.”

John Sloan’s New York City street scene, Fourteenth Street at Sixth Avenue, was also recovered by the GSA. It had hung in a U.S. senator’s office and apparently went home with a staffer after that senator’s death.

“It’s a busy street and there’s I guess an [elevated train] that goes over top, and a bustling street with people walking and cars parked and people in all sorts of dress,” Miller says. “And this really captures life in New York City”

The painting — appraised at $750,000 — was recovered in 2003 and is now on loan to the Detroit Institute of Arts. Other pieces have been found at yard sales, antique malls and on eBay. Many are identifiable by tags that say “Federal Arts Program” or “Treasury Department Art Project.”

Miller, who is stepping down from his post at the GSA at the end of the week, says the government wants to preserve these scenes of America.

“There are just hundreds of portraits of what American life was like in the ’30s and ’40s,” he says, “and it really captures a piece of America and we want to put it up for America to see.”

The GSA has recovered more than 200 works of art so far, and it’s looking for leads on the rest.

The original article can be found here, along with a video version