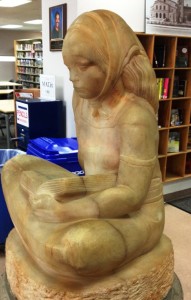 Last week, we reported on a Works Progress Administration (WPA) mural unearthed from a post office basement. This week, courtesy of Diane Bell and the San Diego Union-Tribune, we bring news of WPA art “hidden in plain sight.”

Last spring, Antiques Roadshow devoted an entire episode to a WPA artwork being sold on eBay. (The artworks’ sale is illegal. The works are technically on loan from the federal government.) Inspired, Michael Shefcik, supervisor of plant operations at San Diego’s Hoover High School, decided to follow up on rumors of the school’s possessing some WPA art of its own. Turns out, the artwork in question had been under Shefcik’s nose the entire time: A 30-inch-tall marble statue of a young girl reading a book, its “pages” engraved with “So California Art Project WPA 1940,” had been a part of the school since its completion.

The work did not note the artist’s name. After some research, Shefcik discovered that the statue, entitled “Girl Reading,” was the product of a prolific local artist named Donal Hord. Plans to remodel part of Hoover High School will now make “Girl Reading” a centerpiece of the main entrance’s foyer.

Another testament to the New Deal’s overlooked omnipresence.