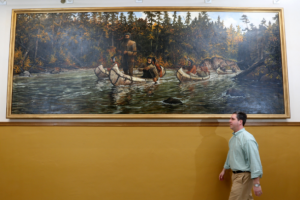 The Living New Deal is dedicated to preserving public works of art under threat from the increasing privatization of our society. We value New Deal art for its public-spirited ambitions, celebrations of local scenes, and representations of the “common man.” But we cannot overlook the fact that artists are the product of their times and their artworks open windows on the past that are not always so pretty. (Consider just one example.) The country has come a long way in combatting racism, understanding the costs of continental conquest, and rethinking ideas of what constitutes “civilization” and “progress.”

The pitfalls of historical revision are readily apparent in a recent controversy over two murals at the University of Wisconsin-Stout, as reporteded in the online forum on art and culture, Hyperallergic. As Allison Meier writes, the murals in question, painted for the WPA in 1935 by Wisconite Cal Peters, have come under criticism for their depictions of “colonial views of Native Americans” and the “‘civilizing’ presence” of European settlers in the region where UW-Stout is located. Consequently, they were to be removed from public view and relocated to less accessible spots in a conference room and a library.

But that decision sparked a reaction of its own, including a protest  by the National Coalition Against Censorship, whose director of programs argued, “If you can’t see them, you can’t even talk about them.” As noted in the group’s letter to the chancellor, the removal of paintings “of historically oppressed groups from view will not change the facts of history.” They proposed, instead, that the artworks remain where they are, only paired with other paintings that “could counter the message.”

The university subsequently announced that the murals would be made available for viewing in “controlled circumstances,” but will be placed in storage for the time being. Without weighing in on the content of the paintings, we believe that such artworks are historical documents that need to be preserved. Our immediate concern is that once they are relegated to storage, they may be degraded by poor handling, damaged by damp conditions, or simply forgotten and ultimately lost. This is no idle concern, because it has happened many times before (including at our home campus, the University of California, Berkeley).