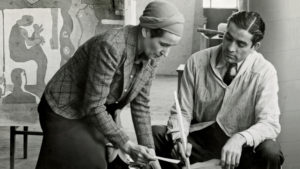 From 1936 to 1942, 400 artists in 36 states, operating under the auspices of the Federal Art Project, fanned out into the American countryside to paint the everyday objects they found there. The result—18,527 watercolors of furniture, clothing, ceramics, quilts, and more—was intended to be published in the Index of American Design, a compendium of the nation’s vernacular arts and crafts. Through the Index, utility and hard work were to be celebrated as quintessentially patriotic qualities, as the nation’s common inheritance, and as important counterpoints to the ethno-nationalism that was then taking root in Germany and Italy. Ironically, then, the Index (which was supposed to be distributed to libraries and schools as an object lesson in patriotism) was never published because its funds were diverted to the war effort. Recently, the large-format coffee table book Kentucky By Design detailed the efforts and results of those FAP artists who chronicled what they saw in the small towns and backcountry villages of Kentucky—reproducing the original watercolors and adding introductory essays by scholars and interviews with FAP officials. In fact, we reviewed Kentucky By Design in a recent newsletter.

We were doubly pleased, then, to learn that Kentucky Educational Television has produced a documentary on the Index of American Design as it looked in their state. (It airs in conjunction with the exhibit “Kentucky By Design” at the Frazier History Museum in Louisville.) At nearly half an hour, Kentucky By Design: Kentucky Muse showcases art historians and curators who provide background to the project, situating the Index within contemporaneous debates about art and its uses, the development of the “art worker” as a figure, and Kentucky’s special place as a repository of American craft. Loaded with original documentary footage and a trove of still images, Kentucky By Design: Kentucky Muse provides a timely reminder of what it looks like when a government commits to feeding souls as well as bellies.