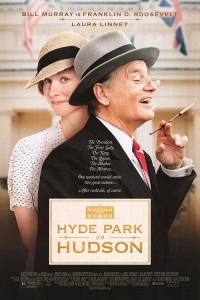 As if to reassure Depression-weary audiences, Hollywood in the 1930s and 40s produced a crop of films celebrating Americans’ resilience and pluck. Mr. Smith Goes to Washington and the Plow That Broke the Plains come to mind. But today, when so many in America (including members of Congress) could use a reminder of how our bootstrap country rose from grinding poverty to middle-class prosperity, we get Hyde Park on Hudson, a film that manages to ignore the remarkable achievements of Franklin Delano Roosevelt’s presidency.

With vision and resolve, FDR reassured a nation struggling through hard times. His Administration wasted no time putting millions to work building infrastructure that would modernize America. His landmark legislative achievements included insuring bank deposits; reining in Wall Street; establishing Social Security, and ensuring rights for workers. But Hyde Park on Hudson instead centers on FDR’s sex life, in particular his rumored dalliance with his distant cousin, Daisy Suckley.

Bill Murray as a jaunty FDR is more believable than I had expected, but it’s a shame that he didn’t have much of a script to work with. Olivia Williams’ portrayal of Eleanor Roosevelt as a witty and prim wife fails to recognize the First Lady as a powerhouse in her own right, a champion of the poor, and FDR’s emissary on how his New Deal policies were playing out in the lives of ordinary Americans.

Given the parallels between FDR’s time and our own, a popular film about one of our greatest presidents could have been relevant. Instead, Hyde Park represents a lost opportunity for popular entertainment and education.