In a recent article in The Daily Beast by Daniel Kevles, Stanley Woodward Professor of History at Yale University, author of Inventing America: A History of the United States, reflects on a trip to Cape Cod, linked to the mainland by three New Deal bridges.  These bridges greatly improved life for motorists and ship captains, while providing economic impetus for the Cape and the region.  Kevles traces the New Deal spirit of government serving the people through public investment and active support of local development back to the 1862 Morrill Act and the creation of the state land grant colleges to support agriculture and rural economies.  The latter was one of the defining acts of the newly-minted Republican Party during the Civil War.  Kevles does not find that spirit of public service 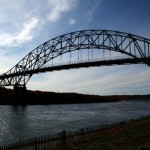 alive in the anti-government policies espoused by the current Republican candidates.